You are here: Home / Pendng / Olympic Committee files for UDRP over 1994 registered IOC.com

The IOC is a not-for-profit independent international organisation made up of volunteers. The IOC President presides over all its activities, while the IOC Session and Executive Board are responsible for taking the main decisions for the organisation.

The IOC generates revenue for the Olympic Movement through several major marketing programmes, including the sale of broadcast rights and The Olympic Partner (TOP) programme. More than 90 per cent of this income is redistributed to the wider sporting movement, which means that every day the IOC provides the equivalent of USD 3.4 million to help athletes and sports organisations at all levels around the world.

The action for filing a domain name dispute over three letter domain name (IOC.com) is highly suprizing given that the domain name was registered 26 years back in December 1994. Though the International Olympic Committee (IOC) may be well known since 19th Century when the Olympic Games were first held in 1896 but claiming bad faith over a 3L (three letter) acronym based domain name is kind of impossible, given the UDRP decisions in the recent past.

It has been widely held that three letter words have infinite interpretations and different meanings for such short acronyms. In Banca Monte dei v. Charles Kirkpatrick, WIPO # D2008-0260, the panel highlighted the significance of short-letter expressions that have meanings other than those claimed by the Complainant. In SK Lubricants Americas v. Andrea Sabatini [WIPO # D2015-1566 <ZIC.com>], it was held; “the Panel agrees with the Respondent that three letter acronym of this type is likely to be of general application to many interested parties, and no one party is likely to be able to claim a monopoly on the use of the acronym in all fields of activity.” 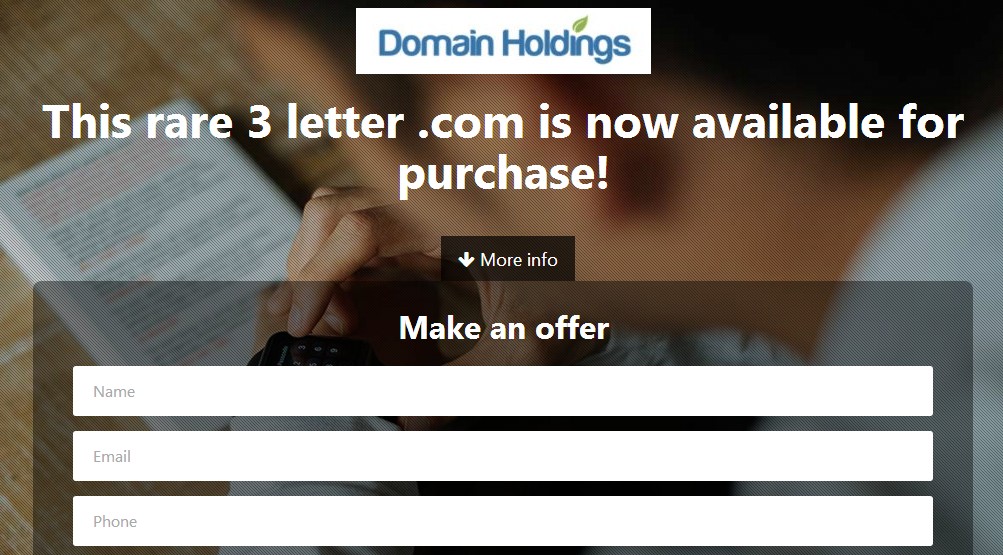 Currently the parking page has a “Make an Offer” page with a form inviting offers from the interested buyers. In any case, offering a domain name for sale is not bad faith per se. The Offer for Sale page was put for the first time in year 2018 as per Archive.org. While intially it had some unused page, followed by some news displayed over it and later was redirected to http://app.2rhythms.org/ till 2016. Though, in any case, there has been no reference to the Complainant or it’s activities to prove any Bad Faith use. Though it will be interesting to watch if it would be held as Bad Faith registration since knolwedge of Olympic Committee cannot be ignored, whatever the jurisdiction of the Respondent.

Further important thing that will be required to be considered in this matter if the Complainant has a Trademark for mark IOC and since when. So first such registration is visible within the jurisdicition of Canada, which was a multiclass application covering almost all the Trademark classes, vide Trademark Application No: 903717 dated 1989-02-28 – Applicant Name: Canadian Olympic Committee. Later in 1993 in Switzerland, by Comité International Olympique, vide application no 058431993 dated 1993-04-01.

But obviously it is not a distictive or unique term to grant exclusive rights to the Complainant to use the term. The WIPO Tradenmark Database shows first such many registration since 1975 and 1976 in India. Though in India IOC is more famously referred to as Indian Oil Corporation (IOC), which has official site at IOCL.com.  Even in Canada, there have been atleast another application for the term IOC indicating International Organization for Confirmity, that was applied earlier to Complainant’s application !

In short, it doesn’t seem possible that the Complainant may succeed !

The update in the matter is that today on March 29 2021, the status of the case has been changed from Suspended to Terminated… available here.

Further, the new WHOIS information that got updated on March 26 2021, is available here, shows new owner for the said premium domain name <ioc.com> as “International Olympic Committee”. That is, the domain name has been transferred to the International Olympic Committee, though difficult to say, with or without consideration. The WHOIS information is as follows:

#UDRP #CAC #TUCON.com (2015) denied. Complainant contends that Respondent only bought #DomainName for speculative purposes and did not transfer to him free of charge. Held Complainant allegations are contradictory and he fails to prove the second element @ https://udrp.adr.eu/adr/decisions/decision.php?dispute_id=104535

#UDRP http://Pay.com denied. Complainant has rights in #PAYCOM since Feb. 2000. Respondent acquired #Domain in Nov. 2000 and making a bona fide use of as a software platform. Held Respondent cannot have registered or used the domain in bad faith @ https://www.adrforum.com/domaindecisions/1993513.htm

#UDRP #LOTTOARVONTA.com denied. Held Complainant owns TM for word "lotto" with additional elements, rather its applications for word #LOTTO got rejected due to non-distinctiveness. Keywords mean 'Draw Lottery' in #Finnish, put to use in descriptive sense @ https://udrp.adr.eu/adr/decisions/decision.php?dispute_id=104551

#UDRP #artmeta.io denied. Complainant is in the process of developing and creating a #metaverse project “ArtMeta”, in which the Respondent collaborated. Held present case essentially describes a business dispute and is not a typical cybersquatting case @
https://www.wipo.int/amc/en/domains/decisions/pdf/2022/dio2022-0018.pdf